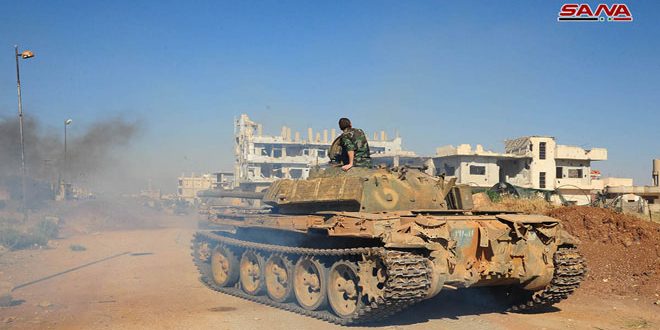 Daraa, SANA_ The Syrian Arab Army units operating in Daraa on Friday seized control of al-Nu’aima town on the eastern outskirts of Daraa city after rooting out the last hotbeds of terrorist organizations. 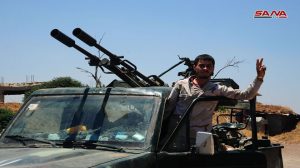 By entering al-Nu’aima town on the outskirts of the city of Daraa from the east direction, the army units have achieved a new step to restore security and stability to Daraa eastern countryside and end the terrorist presence there, SANA reporter said.

The reporter added that the army units inflicted heavy losses upon terrorist groups in personnel and equipment.

The operations of the army, the reporter said, were characterized by accuracy and accompanied by intensive fire. 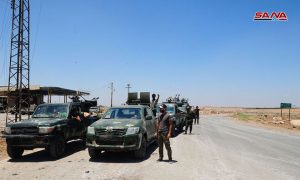 The operations ended up with eliminating a number of terrorists and destroying their hotbeds and weapons while the others fled towards the Jordanian border where the army units continue to pursue them and target them with appropriate weapons.

The engineering units began to comb the town to clear it of terrorists’ remnants and in preparation for the return of people to it.

Taking full control of al-Nu’aima town, adjacent to Daraa city, poses a decisive step towards ending the terrorist presence in the entire eastern countryside of Daraa and moving towards the eastern and southern neighborhoods of Daraa for liberating the entire city of terrorists.

On Thursday, the army units advanced inside Saida town after fierce clashes with terrorist groups during which a number of terrorists were killed or wounded.

A Syrian Arab Army unit repelled an attack by a terrorist group from Jabhat al-Nusra which attempted to target a military position in the surroundings of al-Baath city in Quneitra province.

SANA’s correspondent in Quneitra said that an army unit engaged in fierce clashes with a terrorist group that had attempted to infiltrate and attack a military position in the surroundings of al-Baath city.

The correspondent said that the clashes resulted in thwarting the attack, leaving most members of the terrorist group dead or injured.