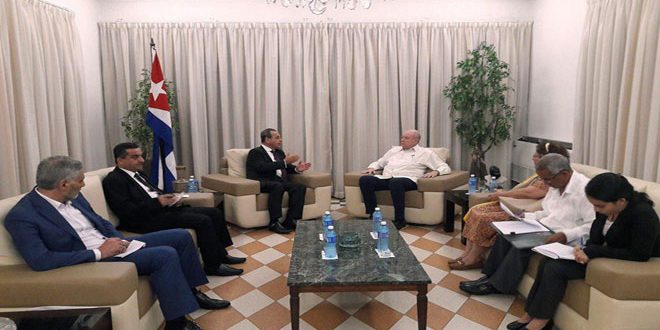 Havana, SANA- Cuban Minister of Foreign Trade and Investment, Rodrigo Malmierca Diaz affirmed his country’s support for Syria in its war against terrorism.

During his meeting with Health Minister Dr. Nizar Yazigi in Havana on Thursday, the Cuban Minister said that “standing by Syria and supporting it is a firm Cuban decision that is based on Cuba’s consistent policy of supporting friends and allies.”

The Cuban minister noted that the signing of a medical cooperation agreement contributes to enhancing the relations between the two countries in this field and allows the establishment of relations with Syria in other fields.

On Wednesday, Syrian and Cuban Health Ministries signed a medical cooperation agreement to strengthen relations in this field.

“It’s our duty to provide all kinds of help to the Syrian people in light of the current ordeal they are going through,” he said.

The Cuban official expressed  his confidence that Syria will triumph over terrorism thanks to the  sacrifices of its army and steadfastness of the Syrian people and their leadership.

In turn,  Yazigi, considered  the agreement as a “starting point for building a strategic partnership for cooperation in health field and the other fields, transferring  biotechnology and  importing medicine in both directions, training and exchanging expertise and researches.