Legal status of over 1000 persons in Daraa countryside settled 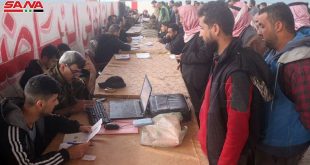 Daraa, SANA- Over 1000 persons in the northeastern countryside of Daraa have had their legal status settled on Wednesday.

SANA reporter in Daraa said that the competent authorities, in cooperation with the local reconciliation’s committees settled the legal status of 450 persons in Shaara village in the northeastern Daraa countryside, including 250 gunmen after they turned themselves in and handed over their arms to the authorities and others those who dodged the compulsory or reserve military service.

The reporter said that 400 persons have had their legal status settled in the towns of Karim al-Janoubi, Eib, Jadaland al-Rweisat, including 100 gunmen who turned themselves and arms in and 100 persons who dodged the compulsory or reserve military service, in addition to settling the legal status of 150 persons among them gunmen in al-Sharea village.