Ambassador Ala: Syria’s presidency of Conference on Disarmament is important political victory 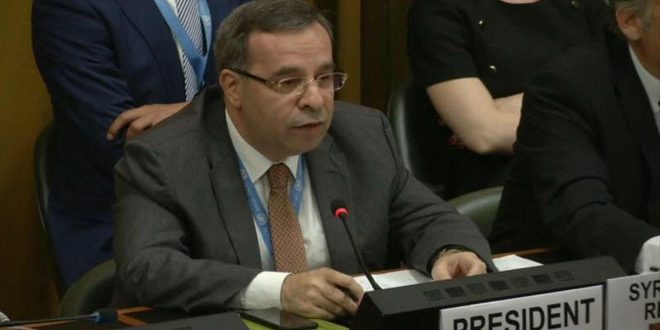 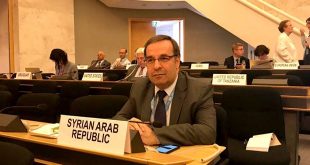 Ambassador Ala: Syria rejects attempts of politicization and double standards policy adopted by some countries 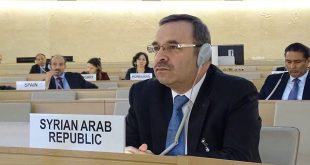 Geneva, SANA – The United Nations Conference on Disarmament concluded its activities on Friday under the presidency of the Syrian Arab Republic.

Speaking to SANA after the closing session of the Conference, Syria’s Permanent Representative to the UN in Geneva, Ambassador Hussam Eddin Ala, said that the success achieved by Syria in heading this Conference and the great support it received from its active members constituted an important political victory as it coincided with Syria’s victories in its war against terrorism.

He added that Syria’s presidency of the Conference on Disarmament dealing with international security issues and disarmament strategies in the world was an international recognition of the victory of the Syrian state in the face of the war that targeted it over the last seven years and the return of the pivotal role of Syrian diplomacy in international organizations.

The Ambassador pointed out that during the closing session, the Ambassador of Venezuela, who spoke on behalf of the Non-Aligned Movement (NAM) countries, praised the professionalism and effectiveness of Syria in heading the Conference and voiced appreciation of the work program proposed by Syria.

According to Ala, the NAM also slammed the attempts by the US and its allies to prevent the Conference from adopting resolutions related to its agenda and to exploit it to serve political positions that are unrelated to the jurisdiction and mandate of the Conference.

The Syrian Arab Republic submitted a draft work program that would allow the conference to resume its work despite attempts by the US to thwart that initiative, he said, explaining that the draft included the call to start discussing an agreement against chemical terrorism based on an initiative submitted previously by Russia.

Syria assumed the presidency of the UN Conference on Disarmament from May 28 till June 26 for the third time since its accession in 1996.

The Conference on Disarmament was established in 1979, comprising 65 States, including the five nuclear-weapon states. It is one of the most important international bodies at the Palace of Nations in Geneva and the single multilateral disarmament negotiating forum.