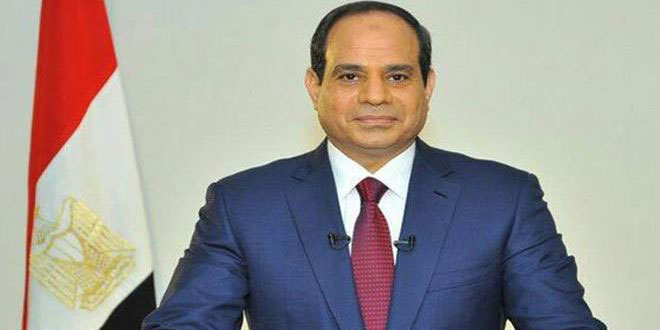 Cairo, SANA-Egyptian President Abdel-Fattah al-Sissi reiterated his country’s stance regarding the necessity of reaching a political settlement to the crisis in Syria that preserves Syria’s territorial integrity and state institutions, backing the Syrians’ will and right to draw their own future and fighting terrorist organizations.

Al-Sissi’s remarks were aired during his meeting with the UN Special Envoy for Syria Staffan de Mistura, Egyptian presidential spokesman Bassam Radi said in a statement on Tuesday.

Al-Sissi affirmed his country’s readiness to intensify contacts for reaching a lasting solution to the crisis in Syria, emphasizing the significance of a unified international stance to achieve this.

2018-06-12
Manal
Share
Previous Cuban First Vice Minister of Foreign Affairs affirms his country’s support for Syria
Next President Rouhani: presence of Iranian advisers in Syria came upon a request from the Syrian government