With the government’s doubled efforts, life returned to liberated city of Palmyra 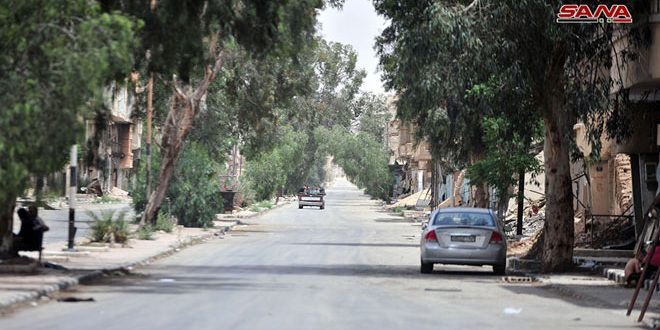 Tadmur, SANA- After more than a year of its liberation by the Syrian Arab Army and declaring it free of terrorism, the wheel of life in the city of Tadmur (Palmyra), began to revolve again and rapidly in this strategic city waiting for the return of thousands of its citizens within the next few days.

The maintenance and repairing works started several months ago in the city, which initially encountered many obstacles. The most important of these was the destruction of the service facilities such as health, education, transportation, communications, energy and construction by Daesh (ISIS) terrorists.

The health centers in the city were totally devastated while the schools were turned into terrorist sites. But the archaeological city got the largest share of destruction and sabotage.

SANA’s camera toured in the city after more than a year of declaring it clear of terrorism and showed how the accelerated rehabilitation works encouraged a number of the city’s citizens to return to their homes after the basic services were restored due to the government’s doubled efforts.

A number of the returnees expressed their relief to return home after they were forcibly displaced as a result of the criminal acts of Takfiri terrorists.

The liberation of Tadmur city has formed a turning point in combating Daesh, especially in the eastern countryside of Homs and the Syrian Badia (desert) area.