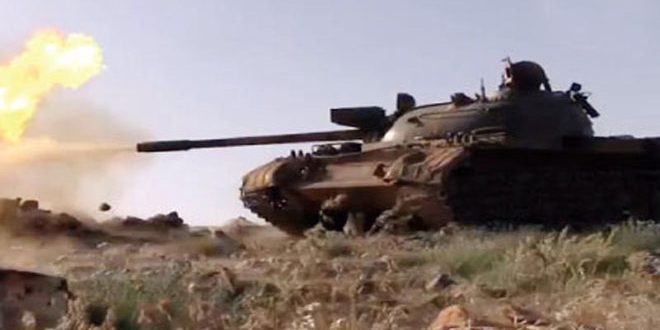 Hama, SANA- Army units inflicted heavy losses upon the terrorist organizations on the direction of al-Zalaqiyat village in Hama northwestern countryside.
SANA reporter in Hama said that the army units on Thursday clashed with the terrorist groups which attempted to infiltrate through the direction of al-Zalaqiyat village in Mhardeh area in Hama northwestern countryside, killing a number of terrorists, injuring others and destroying their weapons and ammunition.
The reporter added that terrorists Mohammad al-Eleiwi and Ahmad al-Khalaf were identified among the killed .
The army units carried out various bombardments targeting the terrorists’ movements and supply routes and destroyed a number of their hideouts, while other terrorists fled away, the reporter said.
H. Zain/ Ghossoun

army Hama infiltration 2018-05-24
hala
Share
Previous Bogdanov: Syria is a sovereign state, entitled to choose party to help in war on terrorism
Next WHO adopts resolution on improving health situation of citizens of occupied Syrian Golan