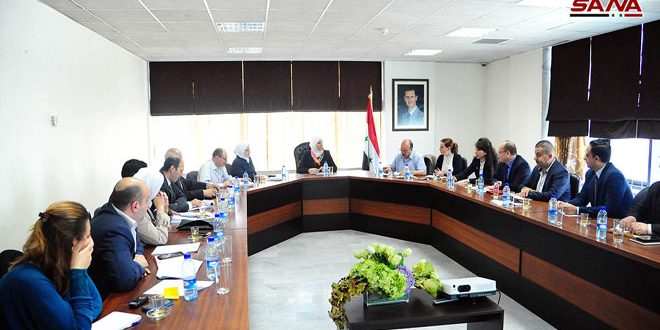 Damascus, SANA- The National Committee for Dealing with Victims Recruited Children works to rehabilite children who have been involved in combat activities by the terrorist organizations through the national plan launched last year, including special educational, and media programsز

The National Committee stressed during its last meeting held on Tuesday the importance of education of those children who have been recruited and the implementation of the law of compulsory education, in coincide with their rehabilitation and provision them with psychological and health support , either within their families or in special centers.

The Committee also recommended spreading community awareness through various media outlets and cultural activities , in addition to including some legal texts on the crime of recruiting children in combat acts within the school curricula.

Head of the Committee, Minister of Social Affairs and Labor Rima Qadiri reiterated during the meeting the need for unifying efforts to rehabilitate the young victims of requirement and integrate them into the society.

She said that the national plan for dealing with the children victims of recruitment was set as a precautionary measure with the aim of addressing the results of the terrorist war on Syria, including the phenomenon of child recruitment.

She affirmed the Ministry’s keenness on training a number of cadres to handle the situation as well as to monitor and inform cases of those children, with respect to the possibility of reaching them, providing them with the psychological awareness and raising community awareness, in cooperation with the government bodies and the civil society, particularly after the victories achieved by the Syrian Arab Army where.

Head of the Syrian Commission for Family and Population Affairs, Dr. Akram al-Qash pointed out that the Commission has developed training guidelines to deal with children victims of recruitment and services to be provided to them, the most prominent of which are the regular or vocational education for children above the age of 15 years.