Terrorists continue handing over weapons in Homs and Hama countryside 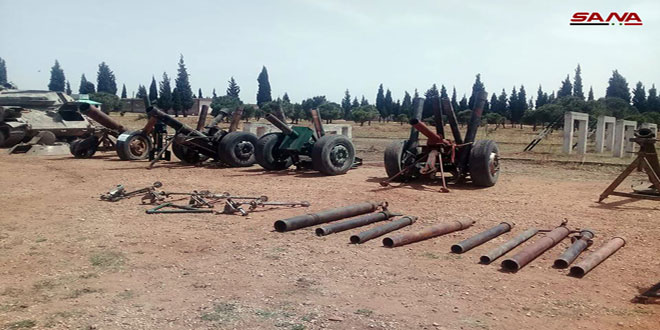 Homs/ Hama, SANA- Terrorist groups on Sunday continued to hand over their heavy and medium weapons in Homs and Hama countryside.

The first batch of terrorists along with their families, who rejected settlement, is expected to leave to northern Syria on Monday, the reporter said.

The army’s engineering units have completed the sweeping operation of the international highway that connects Homs and Hama. While the technical maintenance workshops started to rehabilitate the road in order to reopen it.

The agreement stipulates for evacuation of all terrorists who are rejecting the settlement along with their families to Jarablos and Idleb after handing over their heavy and medium weapons, equipment and ammunition, and to settle the cases of those who are willing to.

As part of the agreement, the army to enter the area and the return of the state institutions to it, in addition to opening Homs-Hama highway and securing it by the army units.