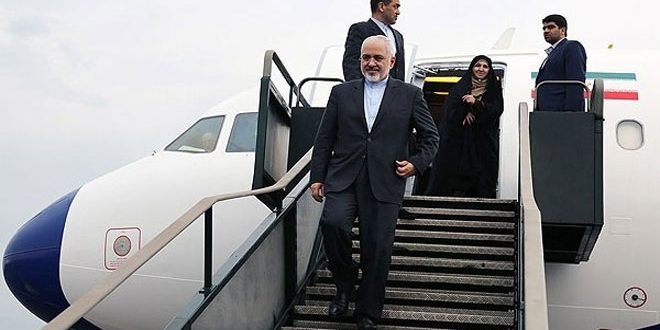 Moscow, SANA – Iranian Foreign Minister Mohammad Javad Zarif said that the meeting to be held in Moscow between Russia, Iran and the Turkish regime is to focus on the continuation of action until reaching a political solution to the crisis in Syria and the objection of any step that violates the county’s sovereignty and unity.

In a statement upon his arrival in Moscow on Saturday, Zarif said that it is important after the latest developments in Syria-particularly in the wake of the tripartite aggression on Syria which led to the deterioration of the situation and the lack of opportunities of reaching a political solution-, that the foreign ministers of Iran, Russia and Turkey would meet once again and exchange viewpoints in order to figure out means of going ahead in the process of Astana and Sochi tracks.

He pointed out that this meeting is also going to highlight the need for investigating into the allegations of the use of chemical weapons through benefiting from the neutral international experts, as no state has the right to consider that any decision making or reaction as its right.

Zarif noted that the Astana process was the only process to make any practical step in Syria as it had been able to start the de- escalation process in the field and create a political pace for solving the crisis.