3 injuries after flash flood in Ruknuddin of Damascus 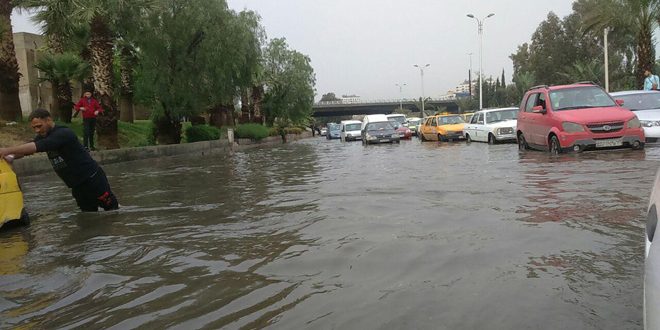 A source at Damascus Police Command said that torrential downpours brought flooding in Damascus and swept away five cars were in the residential area of Ruknuddin, adding that two men were injured and a woman was washed away along the road.

The injured citizens were taken to Ibn al-Nafees hospital where they received treatment before leaving.

The source pointed out that the water flooded the squares of the Umayyad, Arnous and al-Thawra underground causing traffic jams for several hours.

flash flood flash flooding Ruknuddin Ruknuddin neighborhood Torrential downpours 2018-04-26
Emy
Share
Previous Sabbagh: Syrian people suffering due to US and Western coercive measures
Next Syria’s Deputy Representative to the OPCW Ghassan Obaid: The presentation of eyewitnesses aims to reveal the falsity of allegations and lies of Western countries about alleged chemicals’ use in Douma city