President al-Assad to Jaberi Ansari: Tripartite aggression on Syria will not succeed in stopping the war on terrorism 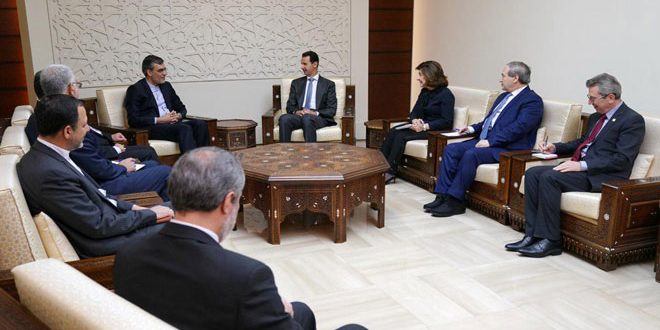 At the start of the meeting, Jaberi Ansari briefed President al-Assad on the political efforts exerted by Iran to help end the war on Syria, discussing the latest developments regarding the situation on the ground.

Jaberi Ansari stressed that the aggression waged by the United States, Britain, and France was motivated by the victories of the Syrian Arab Army and its allies against terrorists, as these three states were worried about these victories continuing at the same pace and expanding in new areas.

President al-Assad said that these three states and their pawns in the region have been supporting terrorists since day one of the war on Syria, asserting that the recent tripartite aggression will not succeed in stopping the war on terrorism, which will continue until control is recovered over all Syrian territory.

The two sides’ viewpoints were in agreements regarding the various issues discussed during the meeting, as they stressed the importance of maintaining cooperation and coordination between Syria and Iran to benefit the two countries’ peoples and to serve stability in the region.

Deputy Prime Minister, Foreign and Expatriates Minister Walid al-Moallem also met Jaberi Ansari, discussing with him the strategic relations between the two countries and their joint efforts in fighting terrorism, in addition to recent developments in politics and on the ground in Syria and the region following the tripartite aggression on Syria. 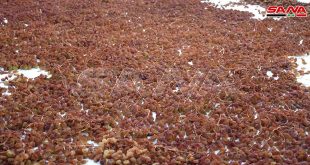 Sweida, SANA- The Sweida Agricultural directorate estimated the total production of raisins made by grapes …