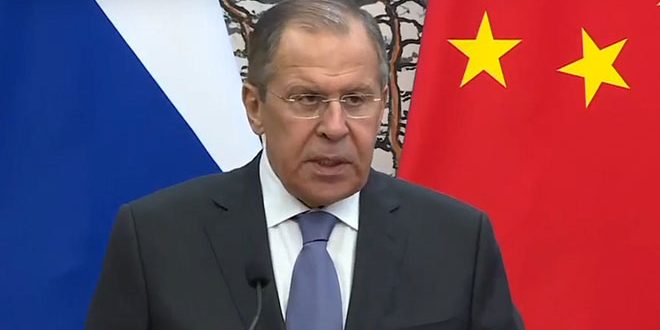 Beijing, SANA- Russian Foreign Minister Sergey Lavrov confirmed that the tripartite US-British-French aggression against Syria violated the United Nations Charter and was based on an alleged scenario  about chemical use in the city of Douma in eastern Ghouta.

Lavrov, during a press conference with his Chinese counterpart Wang Yi in Beijing on Monday,  said that the tripartite aggression against Syria was discussed and that the joint assessment of the two sides was negative since it is a flagrant violation of international law and the UN Charter.

“ The aggression aimed to foil the mission of the fact-finding team of the Organization for the Prohibition of Chemical Weapons (OPCW) to investigate the alleged use of chemical weapons in Douma city, Lavrov said, adding that “Moscow and Beijing reject attempts to undermine global stability by using force outside the Security Council.”

He stressed the need for an objective and impartial investigation without any external pressure from Western countries on the OPCW experts who should visit all places related to the alleged chemical attack in Douma.

For his part, the Chinese Foreign Minister stressed that the international community should do its best to solve the crisis in Syria politically in accordance with UN Security Council Resolution 2254 .

He emphasized  the need to conduct an objective and impartial investigation into allegations of chemical weapons use.

On a relevant note, Lavrov described French President Emmanuel Macron’s stance to keep US troops in Syria as “colonial.”

“I heard that most recently, French President Macron called on the United States to not pull out forces from Syria even when the last terrorist is killed or expelled from the country’s territory,” Lavrov was quoted by the Sputnik agency as saying on the sidelines of his official visit to China on Monday, adding: “We have been concerned over plans of Western colleagues about the future of Syria.”

Lavrov denounced Macron’s remarks on the need to stay in Syria as a colonial stance, pointing out that Russia will ask France to clarify this position.

Lavrov also warned that the terrorist groups in Syria, in coordination with the countries that support them, will plan more provocations in Syria, especially after the tripartite aggression launched recently by the U.S., the UK and France on Syria.

“We must be on guard against a repetition of the provocations, although we have strongly warned our American and European colleagues involved in this adventure,” Lavrov went to say.