Erdogan: Washington has been providing thousands of weapon-laden trucks to terrorists in Syria 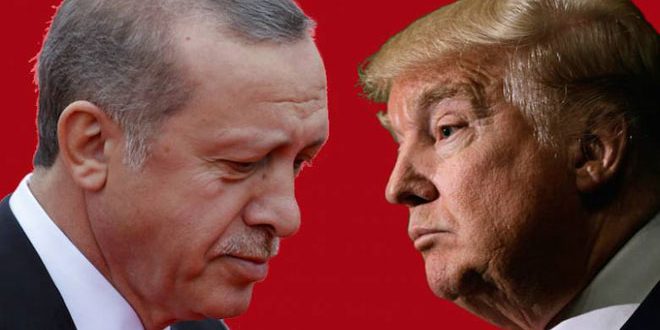 Ankara, SANA – President of Turkish regime Recep Tayyip Erdogan revealed that the US delivered thousands of trucks loaded with weapons to the terrorists operating in Syria, whom Washington calls moderate opposition.

In an interview with the Turkish NTV news channel, Erdogan stated that the US sent 5,000 trucks and 2,000 planeloads of weapons to northern Syria under the pretext of combating ISIS, in a move that poses a threat to Turkey’s security.

The United States has spearheaded the process of supporting terrorists in Syria, trained them and provided them with various types of weapons and sophisticated equipment, in addition to shielding them politically.

The United States and its allies are still seeking to preserve the remaining remnants of terrorists of ISIS and deliberately protect them in Coalition-held areas; the Coalition that was formed in 2014, under the pretext of combating terrorism.

Erdogan did not conceal his intentions to expand his regime’s aggression in northern Syria to include Manbej city in Aleppo countryside, saying that he is waiting for the appointment of the new US Secretary of State and his duties to discuss the issue.

The Turkish regime forces city last March in an illegitimate act that contradicts with UN Charter and international law as well.

The aggression lasted for two months, killing and wounding thousands of civilians in the city and its surroundings and setting off a forced exodus, looting their properties and destroying their houses.