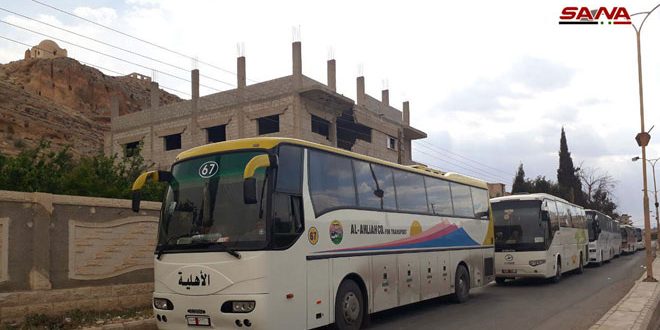 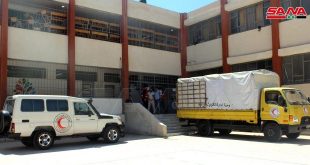 SANA’s correspondent said that 30 buses carrying hundreds of terrorists and their families left for a designated point on the outskirts of al-Rhaiba town as part of the process to evacuate them from al-Rhaiba, Jairoud and al-Nasiriya in eastern Qalamoun area to be bused on Sunday evening to the north of Syria.

The correspondent said that explosive belts and ammunition were discovered among the terrorists’ belongings as they were frisked at the last checkpoint on the outskirts of al-Rhaiba town.

The correspondent added that the evacuation process of terrorists and their families from eastern Qalamoun will continue till Monday.

Reports put the overall number of the evacuees in the process somewhere between 5 and 6 thousands.

Jarablos Qalamoun terrorists 2018-04-22
Manar
Share
Previous The Cabinet calls for enhancing communication with Syrian investors abroad
Next Erdogan: Washington has been providing thousands of weapon-laden trucks to terrorists in Syria