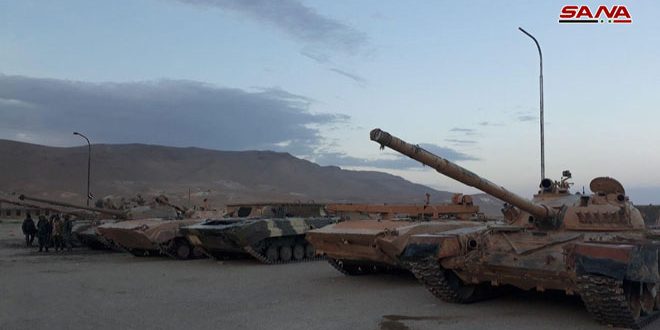 Damascus Countryside, SANA – As per the agreement for evacuating terrorists from al-Rheibeh, Jairoud, and al-Nasseriyeh towns in the Eastern Qalamoun region in Damascus Countryside, the terrorists handed over their heavy and medium weapons and ammo caches including US and Israeli-made missiles before leaving the area and heading north.

al-Nasseriyeh al-Rheibeh Damascus Countryside Eastern Qalamoun handed over Jairoud Jaish al-Islam terrorists turned over weapons 2018-04-22
Hazem al-Sabbagh
Share
Previous Syria and Crimea sign cooperation agreement and letter of intent for cooperation between businessmen
Next The terrorists in Eastern Qalamoun hand over large amounts of weapons, including US and Israeli-made missiles