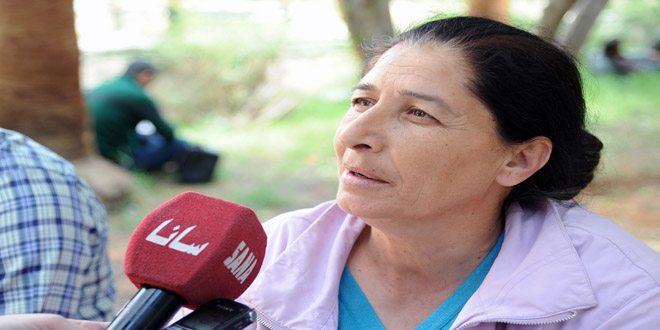 Damascus, SANA- “I hope I will see my son Yamen among the liberated,” said Adib Sulaiman, father of abducted soldier Yamen who was kidnapped five years ago.

Yamen’s father, who arrived from Tartous early in the morning, is living emotionally-charged moments along with other abductees’ families who are waiting nervously at al-Fayhaa Sports City, hoping to get wind of any information about their beloved ones.

Emotions are running high in the sports city where families of abducted people assembled, fired with a fresh hope after Jaish al-Islam terrorists were defeated in Douma.

On Sunday, the first batch of the abductees held by “Jaish al-Islam” terrorists in Douma was liberated in implementation of an agreement which provides for liberating all the abductees in Douma in exchange for evacuating the terrorists and their families to Jarablos.

Samir Abdel Hamid has spent his night at al-Fayhaa City waiting for good news about his brother Ali, who was kidnapped in Zamalka seven years ago. When he saw SANA’s camera, he rushed to ask if we have any information that might set his mind at peace.

“Long days of agonizing waiting have passed since my son was abducted in Ghouta,” said Salim Shahoud who came from Lattakia in the hope of seeing his son in few hours, adding that “our sons will sacrifice their souls if need be.”

Soldier Ali Subuh says he has been on a leave from work since 7 in the morning. He came to al-Fayhaa searching for any piece of information about his cousin Mahmoud, saying “my family in Tartous is waiting for good news about Mahmoud.”

At about 11:00 p.m. on Sunday, a bus with scores of abductees on board, mostly children and women, got out of Douma City through al-Wafedeen corridor before heading for al-Faihaa hall in Damascus City which arrived to a crowd of families.

Speaking to SANA, the mother of the abductee Sari Karata who came from Lattakia to join the families of the kidnapped persons, said that this is one of the most difficult moments in her entire life after her son was kidnapped in Douma four years ago, adding that “We are all confident in the Syrian Arab Army and we were happy by the agreement to liberate all the abductees.”

From Deir Ezzor province, Lamia al-Dakhil and her mother are waiting to see her sister and her three children who were kidnapped in Palmyra four years ago when her husband was on a military mission in Damascus.

Struggling to come up with words that describe his emotions, child Bashar Wafiq Mahmoud said as he has been waiting with his mother for the liberation of his father.“I hope to see my father today and I that all abductees will be freed and return to their families.”