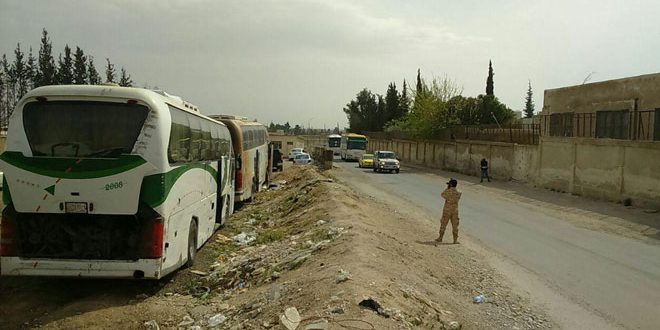 Damascus, SANA – Preparations for evacuating the second batch of “Jaish al-Islam” terrorists and their families from Douma city to Jarablos started on Tuesday in preparation to clear the city from terrorism.

SANA’s correspondent said that several buses have exited through al-Wafideen Camp safe corridor carrying a number of Jaish al-Islam terrorists and their families, and headed to the main gathering point on Harasta Highway, from which they will be transported to Jarablos later. 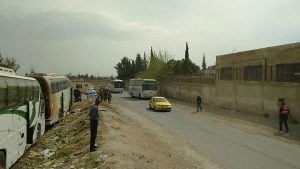 where buses and luggage are searched and the names of the terrorists are verified to prevent them from smuggling any civilian or military abductees, and to make sure that the terms of the agreement are not violated regarding the personal firearms they are allowed to carry with them while they are leaving.

Terrorists of Jaish al-Islam in Douma have been holding large numbers of civilian and military abductees hostage for several years inside the so-called “al-Toba Prison,” in addition to using hundreds of families as human shields.