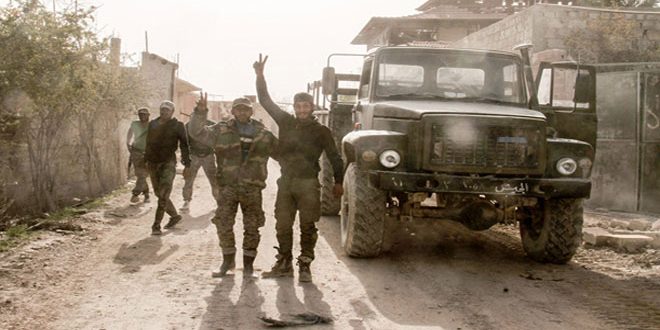 Damascus Countryside, SANA – The towns of Erbin, Zamalka, Ein Tarma, and Jobar in Eastern Ghouta have been declared clear of terrorism on Saturday evening after the last batch of terrorists and their families left the area and headed to Idleb.

SANA’s correspondent at Erbin corridor said that 65 buses transporting 2,935 people including 927 terrorists left via the corridor and headed to Idleb on Saturday evening under the supervision of the Syrian Arab Red Crescent (SARC).

The correspondent said that after this batch left, the towns of Erbin, Zamalka, Ein Tarma, and Jobar have become completely free of terrorism, and the Syrian Arab Army’s engineering unit will later enter these towns to canvass them and clear all landmines and IEDs left behind by terrorists in houses, streets, and squares.

The total number of terrorists and their family members who left these four towns is over 41,000 people, the correspondent added.

Hasaka, SANA- The Turkish regime –backed terrorist organizations have continued their crimes against civilians in …