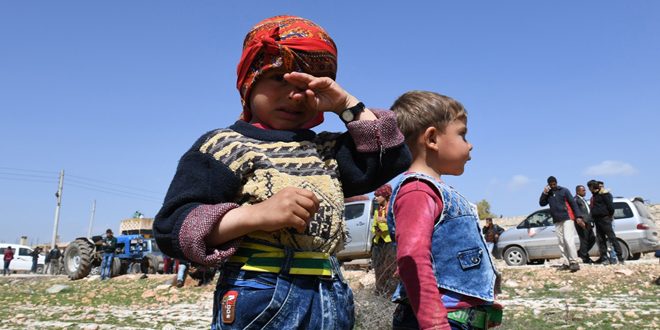 Aleppo, SANA – Amidst grief, sorrow and pain of loss due to the continued Turkish aggression and the invasion of Turkish forces against civilians’ houses and safe villages in Afrin area, the displaced inhabitants celebrated the feast of Nowruz which marks the first day of Spring on March 21st every year.

The bitterness of displacement took away the joy and delight of the eyes of hundreds of inhabitants who gathered in Fafin Square in the northeastern countryside of Aleppo to take part in this annual celebration.

“It is the first time this special occasion is not celebrated in a grand way. Our suffering and homelessness continue as all countries of the world have turned a blind eye and taken no measure to end the Turkish aggression,” the 60-year-old women Fatima Mohammed Osso spoke to SANA reporter with her eyes filled with tears.

For his part, the elderly man Hassan Sheikh Hassan from Mariameen village stressed that Nowruz is a celebration of life and an opportunity to express joy and happiness, noting that today’s gathering conveys a message of steadfastness and clinging to life and hope despite the loss of beloved ones due to the Turkish attacks.

He added that tomorrow will be better and their return to their houses is so close.

In turn, the 70-year-old Abdul Rahman Mohammed called on international community and the so-called humanitarian organizations to take immediate action and stop Turkey’s flagrant aggression on Afrin area, stressing that it has been and will always be a Syrian territory.