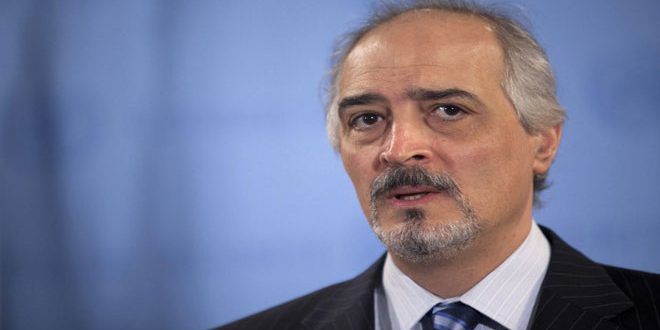 That came in a press release entitled “The random death targets innocent civilians in Damascus on the eve of Mother’s Day”, distributed by Syria’s Permanent Mission to member states and media correspondents at the United Nations about targeting with rocket shells the public market of Kashkoul al-Amara neighborhood and other areas of Damascus.

“The city of Damascus and other Syrian cities have been living for seven years, a daily nightmare of random death and destruction,” al-Jaafari said, indicating to the unbearable escalation of these attacks by the armed terrorist groups backed by government of certain countries, on top of which are the United States, Britain, France, Saudi Arabia, Qatar and Turkey, which they brand these groups as “moderate armed opposition.”

He said that this systematic behavior of these countries’ representatives lacks a minimal sense of human empathy, and their policies are definitely devoid of any moral sense, let alone any sense of respect for the international law and international humanitarian law.

The Permanent Envoy stressed that it is time for all at the United Nations and the international community to upgrade to the level of their responsibilities and consider the real suffering of the Syrians due to the crimes of these armed terrorist groups.

On Wednesday, the terrorist gangs targeted with rocket shells the densely populated Kashkoul neighborhood in Jaramana area, Damascus Countryside, al-Amara neighborhood and other areas of Damascus, leaving 44 martyrs and injuring scores others.