Russian Defense: Three attempts by terrorists to use chemical weapons in Syria thwarted during one week 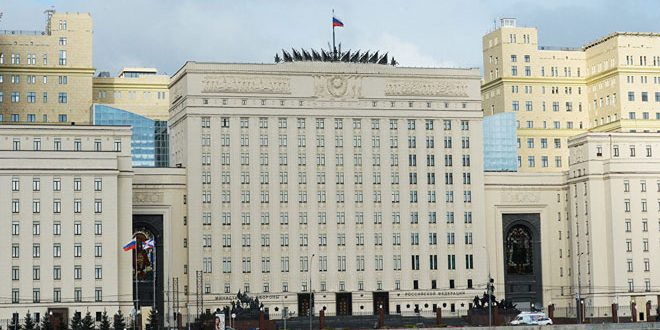 Moscow, SANA – The Russian Defense Ministry said that three attempts by terrorists to use chemical weapons in Syria have been thwarted during one week.

Russian Defense Minister Sergey Shoygu said on Tuesday that terrorist organizations are likely to use toxic chemicals to accuse the Syrian Arab Army of using chemical weapons, and that three such attempts have been thwarted during the past week.

He also said that a unique humanitarian operation is being carried out in Eastern Ghouta, as around 80,000 civilians have been evacuated via the corridors opened by the Syrian Arab Army in cooperation with the Russian Coorination Center and the Syrian Arab Red Crescent.

Shoygu said that the main efforts in Ghouta are for ensuring the safe exit of the civilians from the areas besieged by terrorists and providing aid to the civilians who have been evacuated, adding that 427 tons of aid has been distributed among them, in addition to mobile kitchens, blankets, and hot meals.