Army advances in its operations against terrorists in Ein Tarma valley 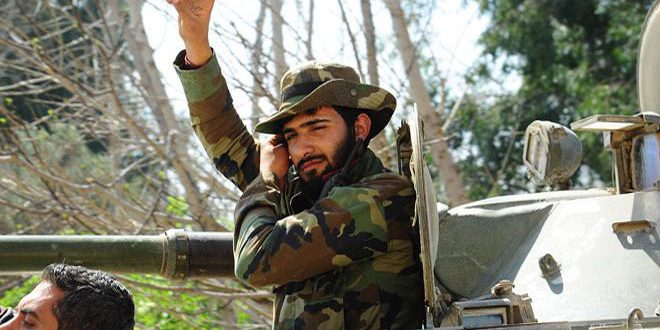 Damascus Countryside, SANA – Syrian Arab Army units continued their operations to liberate Eastern Ghouta of the remaining Jabhat al-Nusra terrorists and the groups affiliated to them.

SANA’s correspondent in Eastern Ghouta said that army units began at dawn on Tuesday precise operaitons in Ein Tarma valley, employing tactics and weapons that suit the nature of the area in order to protect civilians’ lives and preserve the properties and farmlands in it, achieving new advances in the area after inflicting losses upon terrorists.

The correspondent said that this advance is achieved in parallel with military operations against terrorists in the towns of Hazza, Zamalka, and Erbin after fortifying army positions in the towns of Saqba and Kafr Batna, securing the citizens in those towns, and delivering aid to them in cooperation with the Syrian Arab Red Crescent.

A field commander told SANA’s correspondent on the front lines in Ein Tarma that the Syrian Arab Army continued its operations towards Ein Tarma valley and advanced through the eastern farms, inflicting heavy losses upon terrorists and causing their ranks to collapse, as the army gave them no time to reposition or form defense lines or fortifications.

The Field Commander asserted that the operations the army is executing are precise in order to preserve the lives of the civilians taken as human shields by the terrorists.

He added that about 25 families have been secured in their homes in Ein Tarma farms after liberating the area from terrorism, with the army continuing its operations after the arrival of the authorities which provided the families with food and urgent medical aid.

Another field commander said that units of the army advanced more than 300 meters beyong al-Abrar Mosque towards Ein Tarma town, and the advancement will continue till breaking the southern line set up by terrorists.

He added that terrorists had set up a defensive line consisting of three trenches filled with water and preceded by dirt roadblocks and other defenses, but the army units broke through this line easily, reaching a point only 500 meters away from Ein Tarma town center.

The army also repelled infiltration attempts by terrorists coming from the direction of Douma towards the outskirts of Mesraba, clashing with them and leaving many terrorists dead or injured, while the remaining ones fled towards Douma.

The correspondent said that the army is continuing to secure corridors to allow citizens to exit Ghouta.

Army operations Eastern Ghouta Ghouta 2018-03-20
Hazem al-Sabbagh
Share
Previous Aid delivered to more than 25,000 families displaced due to Turkish aggression on Afrin
Next Russian Defense: Three attempts by terrorists to use chemical weapons in Syria thwarted during one week