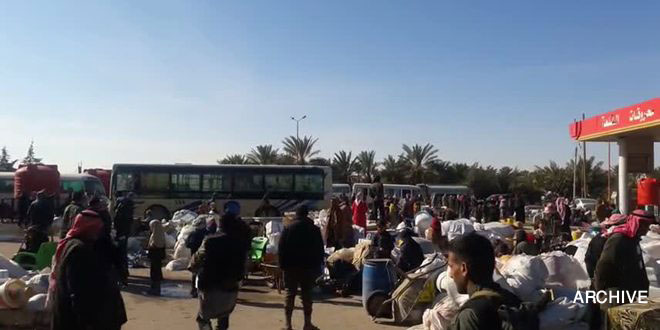 Deir Ezzor, SANA – Hundreds of displaced families have returned to their homes in the eastern countryside of Deir Ezzor province after the Syrian Arab Army restored security to the area and all the basic services were secured.

More than 1,800 persons who were in the makeshift housing center at Gharibah in Badia al-A’shara have returned via buses secured by the governorate along with medical teams and ambulances to provide treatment and vaccines for children.

Secretary of Deir al-Zour branch of the Arab Socialist Ba’ath Party, Saher al-Saqar, said that the return of the families comes as part of the government’s commitment to returning all the citizens who have been displaced by terrorist attacks of Daesh (ISIS) to their homes and villages after cleansing their areas of terrorism and providing them with basic services.