Two martyred, four injured due to terrorist attacks with shells in several provinces 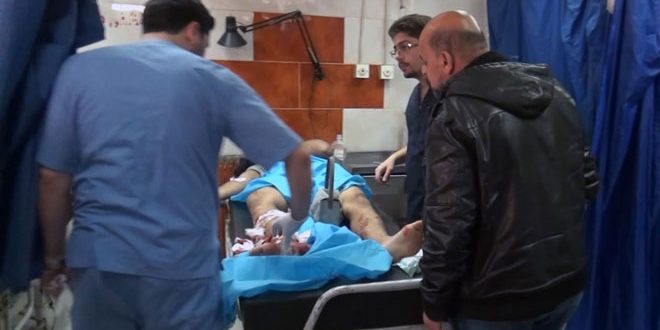 Provinces, SANA-Three civilians were injured due to terrorist attacks with shells on Damascus and its countryside.

A source at Damascus Countryside Police Command told SANA that two rocket shells fired by terrorist organizations positioned in Eastern Ghouta fell in the vicinity of the Police Hospital in Harasta city, injuring a person and causing material damage to the hospital.

In Jaramana city, the source added that two civilians, a woman among them, were also injured due to an attack with three shells by al-Nusra terrorists in Eastern Ghouta.

Later, terrorist organizations fired three shells on al-Bayrouni Hospital and three other shells on the vicinity of al-Assad Suburb, causing material damage only.

Another rocket shell landed in al-Qazaz area, causing material damage to the place.

A source at Damascus Police Command said that six shells landed on different areas in Damascus which caused material damage to the properties.

In Idleb, Two girls were martyred and a civilian was injured due to Jabhat al-Nusra attack by shells on the besieged towns of al-Fouaa and Kefraya in the northern countryside of the province.

Local sources told SANA that al-Nusra terrorists positioned in Binish and Tauom towns in Idleb countryside fired a number of shells on civilians’ houses in al-Fouaa and Kefraya, claiming the lives of two 14-year-old girls, injuring a civilian and causing material damage to the houses.

The attacks coincided with the Syrian planes were airdropping food to the besieged towns of al-Fouaa and Kefraya.

In Daraa, terrorists of Jabhat al-Nusra positioned in al-Lajat area fired four shells on Jbab town, 60 km north of Daraa city, injuring a woman and causing material damage to a number of houses, a source at Daraa Police Command said.

Units of the Syrian Arab Army responded to the attacks by striking the areas from which the shells were launched, inflicting heavy losses upon the armed groups.