Putin: Cessation of combat activities in Syria does not include terrorist organizations 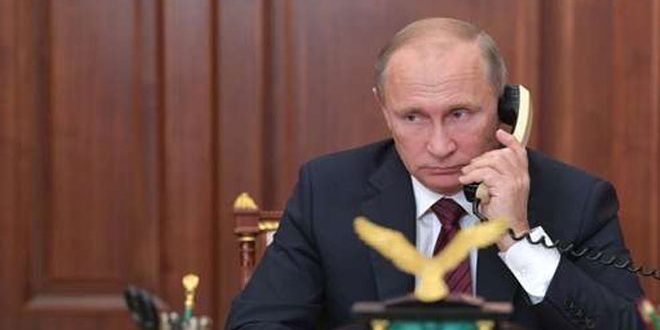 The Kremlin press office reported on Sunday that that the sides discussed the situation in Syria and the provision of humanitarian access in all Syrian regions.

The sides noted the importance of continuing joint efforts in order to implement the provisions of the UN Security Council Resolution No. 2401,

Putin informed the French president and the acting German chancellor of the practical steps Russia was taking to evacuate civilians, deliver humanitarian aid, and render medical assistance to the affected Syrians.

Russian FM: Moscow will confront all attempts to undermine political settlement in Syria

The Russian Foreign Ministry said that Moscow will confront all attempts to fuel anti-Russian and anti-Syrian hysteria and to undermine the political settlement of the crisis.

In a statement on Sunday commenting on the decision adopted by the Security Council on Saturday, the Ministry called on the foreign sides that back armed groups to ensure their compliance with the resolution, stressing that Moscow backed the resolution to alleviate the suffering of Syrians after the amendments suggested by Russia to the draft resolutions were addressed.

The statement noted that armed groups in the Eastern Ghouta refused all intiaitives, prevented opening humanitarian corridors, and did not allow civilians to leave so that they can use them as human shields.

The statement also said that the resolution also references the difficult humanitarian situation in Raqqa due to the actions of the Washington-led alliance which is present in Syria without legal grounds.

The Ministry affirmed that Russia will continue working towards resolving the crisis in Syria as soon as possible.

cessation of combat activities in Syria phone conversation Putin resolution Syria terrorist groups UNSC 2018-02-25
ghossoun
Share
Previous Al-Jaafari: Syrian Government has right to retaliate against terrorist groups if they target civilians even with single shell
Next Syria condemns the US administration’s intention to move its embassy to Al-Quds in May