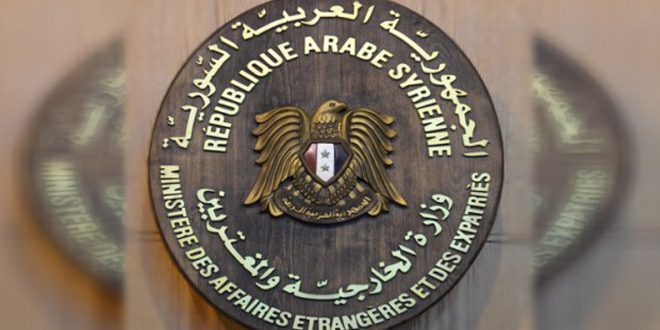 Damascus, SANA – Syria condemned in the strongest of terms the intention of the US administration to move its embassy to Al-Quds (Jerusalem) in May on Nakba Day, saying this is a blatant violation of international legitimacy resolutions.

An official source at the Foreign and Expatriates Ministry told SANA on Sunday that Syria condemns in in the strongest of terms the US administration’s intention to move its embassy to Jerusalem in May on Nakba Day, as this is a blatant violation of international legitimacy resolutions and clearly shows how the United States takes lightly the will of the international community and its hypocrisy when it talks about this international community to implement its hostile policies.

The source said that the US administration’s decision proves once again its hostility towards the Arab nation and its disregard for the nation’s people, proving that the US policies are employed to serve the Zionist project in the region.

“What is happening to the Arab nation due to the ‘Arab hell’ is one of the manifestations of the hostile American policy towards the Arab nation that seek to dismember its states, sow strife among its people, and regress it to the ages of subservience and abhorrent colonialism,” the source said.

The source concluded by saying that the current Arab situation and the collusion of certain Arab regimes with the nation’s enemies have set the stage for this disgraceful US decision, which requires correcting the Arab situation and putting an end to the course of subservience, lethargy, and conspiracy followed by these regimes, and it requires building a unified Arab stance that reflects the will of the people and that can defend the nation’s interests and existence.

al-Quds embassy Foreign and Expatriates Ministry jerusalem Nakba Day United States US US Administration 2018-02-25
Hazem al-Sabbagh
Share
Previous Putin: Cessation of combat activities in Syria does not include terrorist organizations
Next New Governors of Deir Ezzor and Quneitra sworn in before President al-Assad