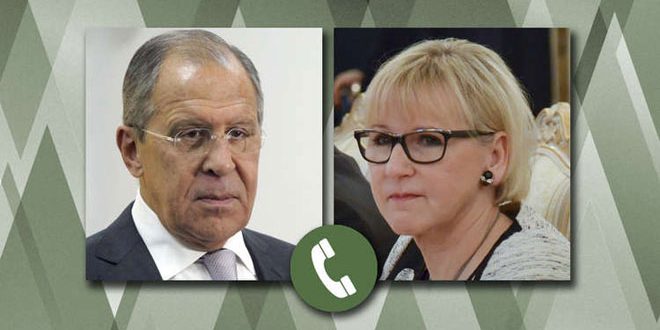 The Russian Foreign Ministry said in a statement Saturday that the two foreign ministers, during a phone call  requested by Sweden side, shared views on political settlement of the crisis in Syria in the context of debates at the United Nations Security Council concerning  a draft resolution calling for a 30-day ceasefire across Syria.

The Security Council has been witnessing intensive consultations among its 15 members for reaching a consensus formula for a draft resolution submitted by Sweden and Kuwait on cessation of combat activities in Syria.

Earlier, Lavrov confirmed that the draft resolution does not contain guarantees to stop shelling residential neighborhoods in Damascus by the terrorists positioned in eastern Ghouta.

He said that for the draft resolution to be effective, Russia proposed a formula containing guarantees by  the countries that back those terrorists.

According to UN sources, Western countries insist on formulas that protect terrorists and not help the population taken by terrorists as human shields.

Russian Swedish Syria 2018-02-24
ghossoun
Share
Previous Tehran: Targeting Syria is part of a plan by foreign powers to destabilize the region
Next Meeting to determine principles of participation in the upcoming Syrian-Russian economic forum