Lavrov: US acts in Syria constitute a threat on Syria’ territorial integrity 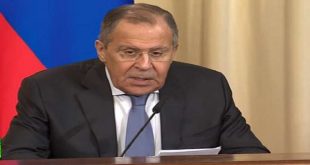 Moscow, SANA – Russian Foreign Minister Sergey Lavrov said that the unilateral acts of the USA constitute a threat on Syria’s territorial integrity.
During a press conference with his Belgian counterpart Didier Reynders held in Moscow Tuesday, Lavrov said that the USA, which has troops in Syria without getting any official invitation, adding that the US Secretary of State Rex Tillerson said in several occasions that the presence of US troops in Syria is to combat the terrorist organization of Daesh “yet the latest US acts and what we hear of new objectives on staying in the country for keeping up with the political process accepted by it stir doubts that it aims to stay in the country for a long period of time if not forever.”
Lavrov pointed out that “the Americans have taken dangerous unilateral steps in the eastern bank of the Euphrates River, which seems to be an approach for undermining Syria’s territorial integrity.”
R. Milhem

Lavrov US troops 2018-02-13
Rasha milhem
Share
Previous Update-Sousan: Syria is committed only to what was voted on in Sochi Congress
Next Locals of occupied Syrian Golan to mark the 36th anniversary of open strike against Israeli occupation