Lavrov: Washington’s real goal in Syria has no relation to combating Daesh 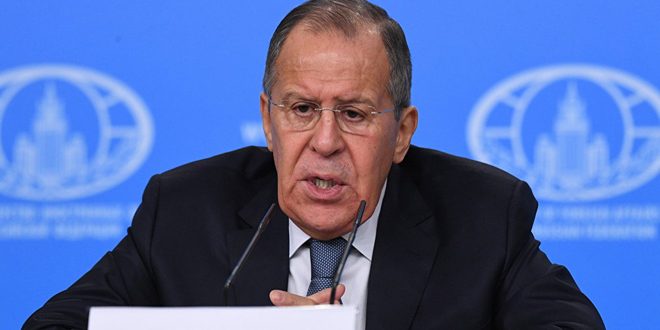 Sochi, SANA- The United States revealed its real aim of the presence of its forces in Syria after it gave up the assurances that its only purpose of its presence there is to defeat Daesh (ISIS) terrorist organization, Russian Foreign Minister Sergey Lavrov said.

Speaking in the Russian city of Sochi on Wednesday, Lavrov said that the US gave up the assurances that the only purpose of its presence in Syria, without an invitation from the Syrian legitimate government, is to defeat Daesh.

“Now they say that their presence in Syria will continue until they are convinced that a stable political settlement process has begun in the country and that it will produce results that serve Washington’s policies,” Lavrov affirmed.

“Looks like in Syria, the Americans have embarked on the course aimed at dividing the country,” Lavrov said. “Plans for the actual partition of Syria do exist, and we are aware of that. We will ask our American counterparts how they see all that,” he added.