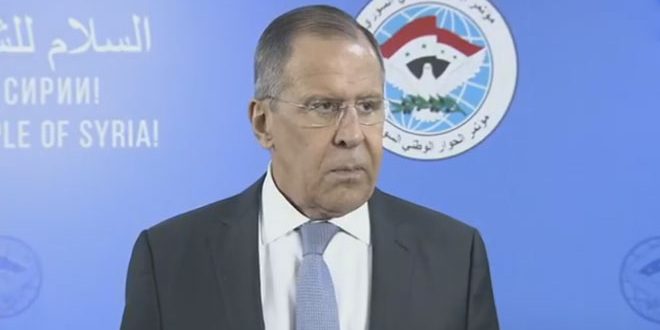 Moscow, SANA- Russian Foreign Minister Sergey Lavrov said that the Syrian National Dialogue Congress in Sochi “has succeeded in general as a first step towards settling the crisis in Syria,” indicating that it contributes to the practical implementation of Security Council’s resolution No. 2254.

Lavrov described the Sochi Congress as “much wider than Astana process and the Geneva talks, in which only the external opposition participated.”

The Russian diplomat considered that this issue constitutes the beginning of the process which seeks to move the resolution No. 2254 into practical implementation under the auspices of the UN, particularly with regard to starting dialogue on the most important issues.

Lavrentiev: Sochi Congress will be incentive for success of Geneva process

The Russian President’s special envoy to Syria Alexander Lavrentiev stressed that the Syrian National Dialogue Congress in Sochi will be an incentive for the success of the Geneva process to settle the crisis in Syria according to Security Council resolution No. 2254.

He indicated that the atmosphere of the Congress was constructive and fruitful and the stances of the participants were serious as they exchanged views and reached unified issues.

The Russian diplomat said that the goal of some members of the “opposition” delegation who came from Ankara “wasn’t to participate in the dialogue, but to thwart the Congress and to tell the international community that the Russian efforts to reach a political solution for the crisis in Syria have led to a bottleneck, yet this didn’t happen.”

He added that the Congress aims at achieving progress in the political process, yet a huge part of the radical opposition abstained from attending and they proposed unacceptable demands to the hosting country and interfered in issues such as slogans and ways of forming frameworks of the Congress, and Russia considers these issues as blatant interference in the affairs of the Russian state.