Lavrov: The West wants to protect al-Nusra to achieve its goals in Syria 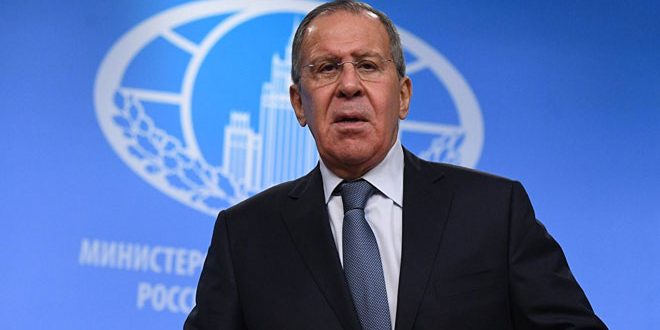 Moscow, SANA – Russian Foreign Minister Sergey Lavrov said that the US and the West want to protect Jabhat al-Nusra terrorist organization and exploit it to achieve their objectives in Syria, ignoring the fact that it is on the list of international terrorism, stressing that this is totally unacceptable to Russia, and it will vehemently oppose such attempts.

During a press conference in Moscow on Monday, Lavrov said that Russia has been saying for years that the US and the West are trying to stir up emotions about what they call the humanitarian situation in Idleb, but these attempts reflect in fact the West’s concern about the Syrian army, supported by the Russian Air Force, encircling al-Nusra’s terrorists there.

He said that it is remarkable that the Western partners want to protect al-Nusra and at the same time turn a blind eye to the destruction of the whole city of Raqqa by the US-led coalition, adding that Moscow would continue insisting that the United Nations and the Security Council pay attention to this.

Lavrov also condemned the US announcement of forming an armed militia in northeast of Syria, saying it was either “a misunderstanding of the situation or a deliberate provocation.”

He said that Washington is making both open and unpublicized deliveries of modern armaments groups it supports in Syria.

“For quite some time our Western partners have been trying to fan a scandal over East Ghouta and Idleb while ignoring the fact that the concentration of militants close to Jabhat al-Nusra remains high there, and that these militants mount fire attacks on Damascus, including the Russian embassy,” Lavrov said in a comment about France’s invitation to hold an emergency session of the UN Security Council on situation in Syria.

“Also, they ignore the fact that just recently the Syrian government and Russian military personnel began an evacuation of children, including those requiring medical assistance, from East Ghouta,” he added.

The Russian Minister stressed the need for all Syrians to participate in the process of political settlement, adding that “Kurdish representatives were put on the list of Syrians invited to the Syrian National Dialogue Congress in Sochi.”