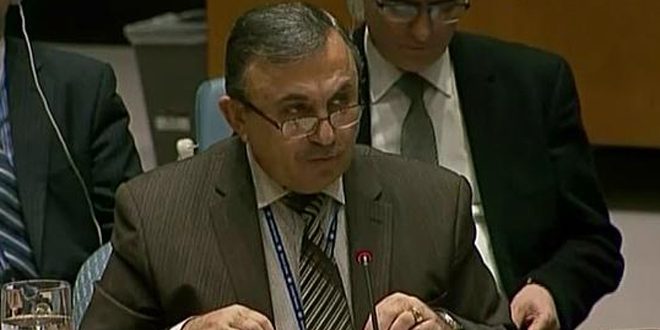 New York, SANA- Acting Chargé d’affaires of Syria’s permanent delegation to the UN Munzer Munzer said that Syria still delivers humanitarian aid to people in need, adding that the distribution process should be coordinated with the Syrian government and this needs the respect for the Syrian laws and regulations.

“Though the UN report affirmed that it had succeeded in delivering humanitarian aid to millions of people in need inside Syria as a result of facilitations provided by the Syrian state and its institutions, Syria still sees that the report needs more balance, objectivity and more commitment to the UN rules, particularly the respect for Syria sovereignty,” Munzer added in a speech before UN Security Council on the 46th monthly report about the status in Syria.

Munzir affirmed that the Syrian government sent a letter to the UN Secretary General and the UNSC Chairman expressing its attitude to the report, adding that makers of regular reports are unable to fix the serious default represented in depending on politicized and open sources which lack credibility and ignore confident Syrian governmental sources.

He went on to say that the Syrian government regrets what the report makers called administrative obstacles and constraints hindering the delivery of humanitarian aid to unstable areas.

Munzer reaffirmed Syria’s continuous efforts to provide all possible facilitations to deliver assistance materials to the Syrian citizens who are in need according the mechanisms agreed upon with respect to the Syrian laws and regulations.

He said that the Syrian government agreed the resident coordinator’s proposal to set up tripartite mechanism based on its keenness and openness to all ideas which would contribute to enhance the humanitarian work in Syria, noting that on the contrary of information included in the report to undermine its efforts as inefficient, five meetings have been convened so far.

Munzer indicated that there are no justifications for cross-border humanitarian aid entry, especially after the establishment of de-escalation zones which helped deliver the aid to those who deserve inside.

He noted that the United Nations Office for the Coordination of Humanitarian Affairs officials are still unable or do not want to find required guarantees to ensure the delivery of aid to targeted citizens and not to the armed terrorist groups.

Munzer expressed the Syrian government’s astonishment at the foggy ideas included in article 29th of the report regarding partners, independent companies or third parties assigned with the mission of verifying the delivery of humanitarian aid to the targeted needy people.

He said that the achievements of the Syrian government in cooperation with its allies in liberating the majority of the Syrian territory from Daesh, Jabhat al-Nusra and other terrorist organizations which hindered the delivery of humanitarian assistance to civilians in those areas require agreement on mechanism to implement the aid delivery mechanisms from inside Syria.

Munzir added that the report makers overlooked Jordan and the USA rejection to deliver humanitarian aid to al-Rukban Camp and Turkey’s refusal to open Nusaybin border crossing in a clear violation of the international humanitarian law which reveals the double standards and politicization of border-cross relief convoys.

The Syrian government denounces the use of “besieged areas” term when talking about the situation in Eastern Ghouta in Damascus Countryside, meanwhile the report deliberately ignored the fact that the civilians in the Eastern Ghouta are besieged inside by the terrorist organizations there which use them as human shields, loot the humanitarian aid materials and sell them to the needy people at expensive prices the same as what is taking place in the eastern neighborhoods in Aleppo. Moreover, private media outlets documented the suffering of besieged civilians and uncovered the practices of terrorist groups.

“Syria calls on the report makers to adopt the principles of transparency, credibility and honesty when talking about the negative impacts of the unilateral economic procedures imposed by the USA, the EU and other states on Syria whose consequences affected all paths and sectors of life as well as the work of the UN agencies and the foreign non-governmental organizations operating in Syria.