Nasrallah: Trump’s decision on Jerusalem is a new Balfour Declaration 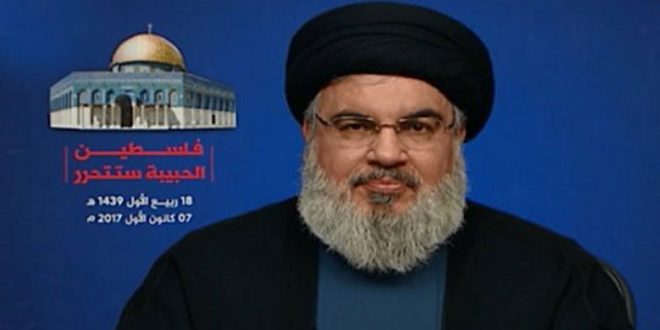 Nasrallah, commenting on the U.S. President’s decision, said that the silence towards such decision implies big risks, the most dangerous of which is the U.S. desecration and violation of all Arab rights.

He added that understanding the threats posed by that decision should stir all sides to shoulder their responsibilities and take action since it has encouraged Israeli entity to further strengthen its domination over Jerusalem city and al-Aqsa Mosque in particular.

Nasrallah stressed that Jerusalem will always remain in the core of the Palestinian cause and “Trump’s decision has shot the last bullet on the political process.”

Nasrallah said that the US does not respect international laws or conventions, adding that the world is now ruled by the law of jungle and the desires of a man who lives in the White House.

He said that the Israeli entity and its interests are of top priorities for the US policy.