Lavrov: We agreed with Tillerson on necessity of resuming intra-Syrian talks without preconditions 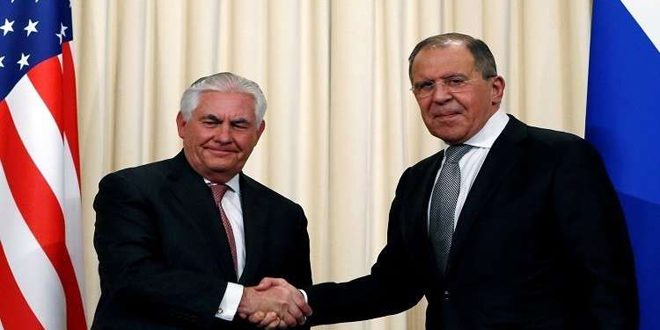 Vienna, SANA-Russian Foreign Minister Sergey Lavrov said on Thursday that he agreed with US Secretary of State Rex Tillerson to resume the Syrian-Syrian talks in Geneva without preconditions.

Lavrov remarks came during a meeting with Tillerson held on the sidelines of the Organization for Security and Cooperation in Europe meeting (OSCE).

He affirmed the need for adhering to Syria sovereignty, independence and territorial integrity.

“The two sides discussed further steps to put an end to the crisis in Syria via establishing a sustainable negotiating process involving all Syrian political sides, including within the Geneva process and in the format of the forthcoming National Dialogue Congress in Sochi, with concurrent completion of the defeat of international terrorist organizations,”Russian Foreign Ministry said in a statement.

The statement added that Lavrov affirmed that the Syrians only should determine their future.