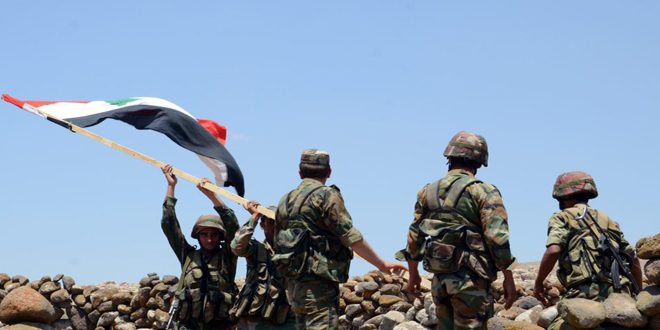 SANA reporter said that over the past few hours, army units, in cooperation with the supporting forces, expanded operations against Jabhat al-Nusra terrorists in the northeastern countryside of the province to target Jabhat al-Nusra hotbeds in Shkhaiter village.

The reporter added that army units and the supporting forces broke into the terrorists’ dens in the village from different directions, and they engaged in violent clashes with them, leaving scores of terrorists dead and others injured, while their remnants fled away to the neighboring villages.

The fleeing terrorists pulled up the bodies of the killed terrorists from the streets of the village in an attempt to cover the heavy losses inflicted upon them in the personnel and equipment.

The army engineering units combed the whole village and dismantled tens of explosive devices and mines, according to the reporter.

Army regains control over Shkhaiter village in Hama countryside 2017-11-20
ruaa-jazaeri
Share
Previous Executive mechanisms of exportation and its role in backing national economy discussed
Next US-led Coalition has not given up the double-dealing with terrorists in Syria, Russian diplomat