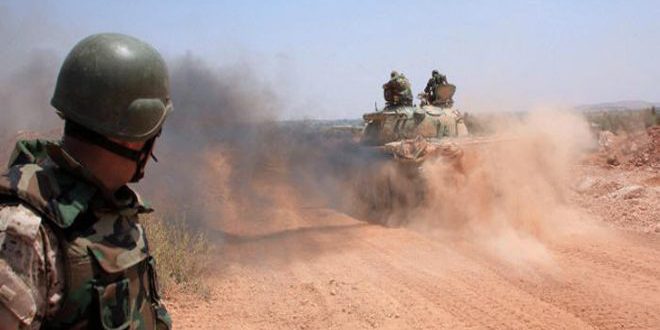 Provinces, SANA- Al-Boukamal city in Deir Ezzor province has been declared fully liberated as the units of the Syrian Arab Army eliminated the last hotbeds of Daesh (ISIS) terrorists there.

SANA reporter in the city, which is located 140 km southeast of Deir Ezzor, said al-Boukamla is now clear of Daesh after the army and allied forces fought fierce clashes with the remaining terrorists over the past few hours after isolating the eastern side of the city.

Earlier, the reporter said the army units advanced slowly and carefully because of the many mines and explosive devices planted by Daesh all across the city, which are now being removed by the engineering units and demining experts.

The reporter said that about 150 terrorists retreated from al-Boukamal to the east of Euphrates River under the cover and protection of the US-led international coalition while others surrendered to the Syria Democratic Forces (SDF) groups that are supported by the US.

In the same context,. army units, in cooperation with the supporting forces, regained control over villages of Haran and Hardaneh in the northeastern countryside of Hama province.

SANA reporter said that the army units carried out a precise military operation targeting Jabhat al-Nusra hideouts in the two villages, killing a number of terrorists and destroying their hideouts.

The reporter added that scores of Jabhat al-Nusra terrorists fled away and army units are pursuing them in the area.