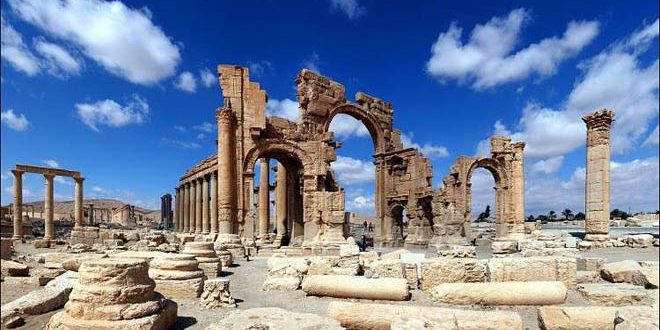 Moscow, SANA_ A unique 3D model of the archaological city of Palmyra has been given to Syria to help it rebuild Palmyra and restore the ancient city.

The model was handed over to Syria’s Ambassador to Russia, Riad Haddad, during ceremonies at St. Petersburg International Cultural Forum on Saturday.

Director General of the State Hermitage Museum, Mikhail Piotrovsky ,said that the model is designed by Russian experts and it is considered as a gift from Russia to Syria, adding that it is the best architectural model of Palmyra City.

Deputy Director of Institute for the History of Material Culture of the Russian Academy of Sciences, Natalya Solovyova ,said “Russian scientists digitized every site and every stone in Palmyra as it became possible to see it with all of its details and measurements.”

The 3D model covers an area of 20 thousand square meters, and every image in it represents a clear geographical position.

The model has been created by scientists from the Institute for the History of Material Culture of the Russian Academy of Sciences, with the help of experts from the Hermitage Museum.

The Russian researchers have created the model based on thousands of drone images. It will help restore and preserve the UNESCO World Heritage site ravaged by Daesh (ISIS).

Speaking during the Forum, Ambassador Haddad said that the model will help in setting suitable plans to rebuild the archeological city of Palmyra, thanking Russia for this work.

“Russia has stood by Syria and it contributed to fully liberating Palmyra City from terrorism and to clearing mines planted by Daesh terrorists, and today it proves its huge support to us on the cultural level through this important project which will help in rebuilding the archeological city,” Haddad added.

General Director of the State Hermitage Museum, Mikhail Piotrovsky, described the 3D model of the archaeological city of Palmyra as an “important document” for the restoration of the archeological area in a scientific way which allows the possibility of global debate on reviving the city.

In an interview given to Russian Russia Today TV Channel,  Piotrovsky said that the model covers all Palmyra city, gives a chance for moving the stones and answers all questions on the capability of carrying out excavation works in a certain area or not, which helps discussing all methods for reviving the city and determining the features which can be built or others left as a symbol of history.

He called for organizing global campaign sponsored by the Syrian government and supervised by the UNESCO, for the protection of the Syrian ruins, expressing the Hermitage Museum readiness to send archeologists to Palmyra to train their Syrian colleagues with the aim of restoration of all statues and building Palmyra Museum.

He added that the restoration of Palmyra Museum will contribute to reviving the city economically and commercially.

Piotrovsky touched upon Russia’s contribution to the restoration of other sites in Aleppo, and signing an agreement with the Agha Khan Network in this regard.

He indicated to the importance of protecting the archaeological sites in times of war.