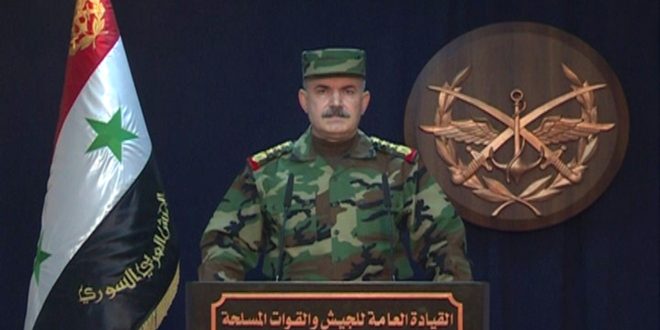 Damascus, SANA_ Army units, in cooperation with the supporting and allied forces, on Thursday fully liberated al-Boukamal city, about 140 km southeast of  Deir Ezzor, the last stronghold of ISIS terrorist organization in the Eastern area,  the General Command  of the Army and Armed Forces said.

” The liberation of the city is of great importance since it represents an announcement of the fall of ISIS terrorist organization project in the region, in general, and a collapse of the illusions of its sponsors and supporters to divide it,” the General Command said in a statement .

The statement stressed that liberation of al-Boukaml constitutes a strategic achievement and a base for eradicating remnants of the terrorist organizations with its various names along the Syrian territories.

The Army Command stressed that the liberation of the city came after engaging in fierce battles in which large numbers of terrorists were killed including ISIS leaders.

The Command statement said that members of the engineering units immediately started to dismantle the explosive devices and mines planted by terrorists in the neighborhoods of the city, indicating that the army units are still pursuing ISIS terrorists who fled away in different directions to eliminate the rest of the terrorists’ dens in al-Badia (desert) after destroying their positions and equipment.

Over the past months, the city of al-Boukamal has been subjected to random aerial bombardment by the illegal US-led coalition, allegedly targeting ISIS sites, which caused massive damage to the city.

Reports confirmed that most of the airstrikes conducted by the coalition’s airplanes targeted bridges, residential buildings and infrastructure in the city.

The Command indicated that the army established control over wide areas on the Syrian-Iraqi borders and ensured the security of the roads between the two brotherly countries.

The continuous coordination between the Syrian and Iraqi armies has played a big role in clearing large swathes of the border area and in preventing the infiltration of ISIS terrorists, who were moving during the past period between the two sides of the border under the protection of the US-led coalition.

The Army Command’s statement pledged that our brave armed forces will ever remain the immune fortress of the homeland in facing terrorism, foiling the Zionist-American projects and defending the Syrian Arab Republic territorial integrity and safety.

Concluding the statement, the Command saluted the martyred army and armed forces personnel, appreciating the support provided by the backup and allies forces which played significant role in the victories against terrorism.