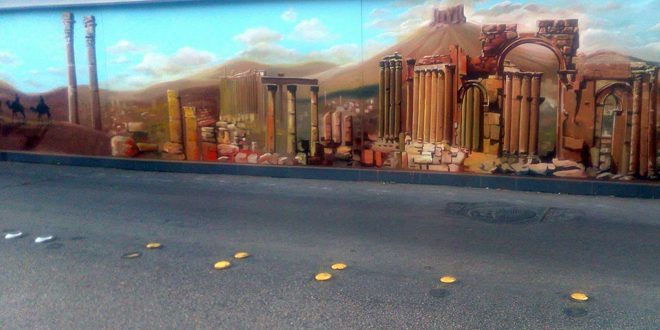 Damascus, SANA – A mural featuring the deep-rooted Syrian-Chinese Silk Road covered the fence wall of the Chinese Embassy in Damascus.

The idea was devised and executed by artist Fida Mansour and gained the Embassy’s approval.

The 50 m long and 2 m high mural is meant to reflect the deep-rootedness of the relations binding the two friendly countries for thousands of years, according to Mansour.

This work of art is “an expression of the solid historical relationship between Syria and China as it depicts the Silk Road that bound the two friendly countries through the trade convoys of the ancient Palmyra civilization, so I started with the Great Wall of China and ended with the Bride of the Desert,” said Mansour in a statement to SANA.

Mansour said that his painting will add an aesthetic value to the Embassy’s surrounding, adding that his piece is “an opportunity to show my artistic abilities through a work that embodies an artistic, civilizational and aesthetic value in one of Damascus’s streets.”

Fida Mansour was born in Jableh, Lattakia. He graduated from the Faculty of Fine Arts in Damascus in 1999 and pursued higher studies until 2001. He works as a teacher at the Institute of Artistic, Plastic and Applied Education in Damascus since 2004.