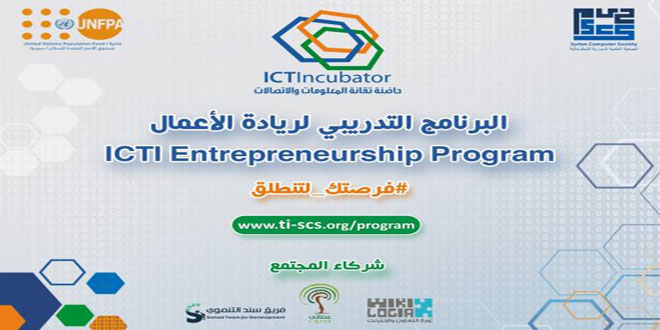 Lattakia, SANA – The Lattakia-based “Eureka” project won one of the six grants provided by the Entrepreneurship Training Program, organized by the Syrian Computer Society (SCS) in cooperation
with the United Nations Population Fund.

The three-stage program, which kicked off last May, aimed at empowering youth capabilities in the entrepreneurship field. At the end of its activities, six out of 24 powerfully competing projects were chosen to be funded, with a SYP 1.5 m grant each.

“Eureka” was one of seven projects based in Lattakia that made it through to the second stage of the joint program that was held in September.

The main idea of the 5-member project is based on using technology to provide a better educational and cultural environment for children through developing their play fashion by adopting the method of interaction between the child and technology.

To achieve that end, the project has built a set of interactive applications covering various fields such as space and human body. The projects uses the virtual reality and augmented reality techniques in developing the apps, in addition to adding a group of additional tools like interactive cards and books and virtual scientific experiences to contribute to developing the child’s knowledge and skills and stimulating their senses.