The army regains 50 km2 in eastern countryside of Homs 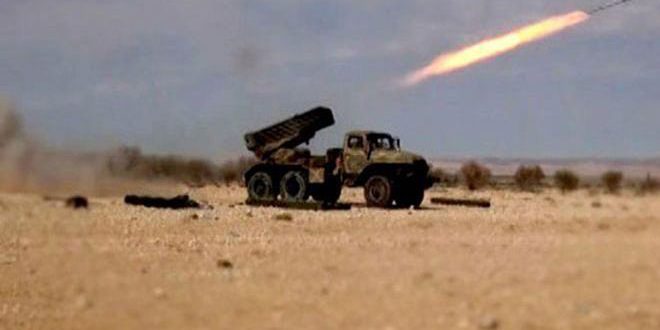 Provinces, SANA- The army regained some 50 square kilometers during its continued military operations against the remaining ISIS terrorists in Jebb al-Jarrah area in the eastern countryside of Homs, a military source announced on Sunday.

The source clarified in a statement to SANA that the army units carried out intensive operations against gatherings and fortified positions of ISIS on the southeastern outskirts of Jebb al-Jarrah area, 80 km east of Homs city.

As a result of the operations, the army reestablished control over the villages of al-Sadwaniyeh, al-Mekrimiyeh, Rasm Sweid, Tallet Rajm al-Shara and Jouzet Nazal in the area, the source said.

A number of ISIS terrorists were killed and amounts of their weapons and equipment were destroyed, including armored vehicles and cars equipped with machine guns, according to the source.

The source added that the army’s engineering units have started to comb the area to defuse and dismantle explosive devices and bombs planted by ISIS terrorists there.

Army units, in cooperation with the backup forces, engaged in heavy clashes with ISIS terrorists in Huweijet Sakker area in parallel with destroying ISIS positions and fortifications by the Army Air Forces in some neighborhoods of Deir Ezzor city and its countryside.

SANA reporter said Sunday that the Army units killed a number of ISIS terrorists in Howeijet Sakker, adding that the military operations coincided with the airstrikes of the Air Force and Artillery of the Army against the terrorists’ gatherings and fortifications in the neighborhoods of al-Jbeileh, al-Aredi and Kanamat and the supply routes in the villages of Hatleh and Khasam, 18km east of Deir Ezzor city.

The reporter mentioned that the army airstrikes destroyed ISIS fortifications and hideouts and killed a number of terrorists.