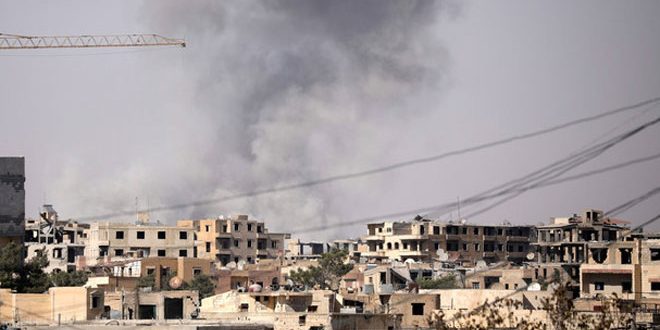 Damascus, SANA – Thousands of civilians in Raqqa are under an increasing risk of losing their lives because of the systematic bombing of the US-led coalition with white phosphorus bombs and the siege imposed on them by ISIS terrorists.

According to reports from the besieged city of Raqqa, the residents of the city are suffering from lack of food and medical supplies, due to the deliberate targeting of the National Hospital, which has been subjected to several raids of the Us-led coalition during the past few weeks.

More than 100 civilians have been killed since the beginning of this week and dozens were injured in the international coalition’s raids, which targeted civilians in a new crime to be added to the record of crimes against the Syrians, which requires from the United Nations and the UN Security Council to intervene immediately to resolve this coalition and bring its officials to account.

The Senior Crisis Response Adviser at Amnesty International Donatella Rovera said that thousands of civilians are trapped in a deadly labyrinth with the intensity of the clashes during the battle for the capture of Raqqa from ISIS, adding that the US-backed forces nearing Raqqa’s central neighborhoods must “redouble” efforts to avoid disproportionate shelling and create safe civilian exits.

She added that civilians are trying daily to escape from Raqqa, but they are facing several risks resulting from the fire of clashes and shelling.

Rovera quoted Mahmoud, one of al-Der’iya area in Raqqa who managed to escape from Raqqa as saying “It was a terrible situation … ISIS wouldn’t let us leave. We had no food, no electricity.. They besieged us with snipers. If you get hit by a sniper, you die in your house. There were no doctors.”

“Things will only get more dangerous as the battle reaches its final stages in Raqqa city center,” Rovera added.

“More can and must be done to preserve the lives of civilians trapped in the conflict and to facilitate their safe passage away from the battleground,” she urged.

“Those besieged in Raqqa face horrific brutality at the hands of ISIS  of that there is no doubt. But violations by ISIS do not lessen the international legal obligations of other warring parties to protect civilians,” she stressed.

The international coalition admitted the use of white phosphorus bombs last June during its aggression on the Syrians in Raqqa in which dozens of massacres took place. Hundreds of Raqqa’s inhabitants were victims of indiscriminate bombing by the coalition, in addition to the huge destruction caused to the national hospital and its services infrastructure.

In July, the Syrian Arab Army opened 4 humanitarian routes to evacuate civilians from the city of Raqqa in order to protect them and rescue them from the coalition’s raids and terrorist attacks. Many families were able to exit through these routes and reach military control areas in the southern countryside, where they were transported to temporary residing centers in Hama.