Russia: UNSC’s inability to condemn terrorists’ acts in Syria encourages them to carry out new attacks 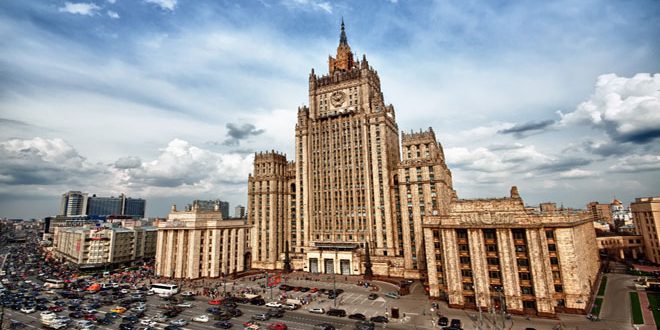 Moscow, SANA – Russian Foreign Ministry affirmed that the inability of the UN Security Council to condemn the acts of terrorists encourages them to carry out new provocations and terrorist attacks.

In a statement published on Friday, the ministry said that Moscow is outraged that the UN Security Council has not condemned the recent shelling of the Russian embassy in the Syrian capital Damascus.

“Let the unwillingness to show diplomatic solidarity with us remain on the conscience of these delegations. The most outrageous thing is that the inability of the Security Council to condemn the acts of terrorists encourages them to carry out new provocations and terrorist attacks, makes them feel impunity. These barbarians should not have the conviction that someone in the Security Council is at one with them,” the ministry said.

The statement notes that it goes without saying that the attacks carried out by Jabhat al-Nusra which is responsible for the shelling have to be globally condemned, and that there should not be any ambiguity in the assessments of attacks against diplomatic missions, adding that Russia reiterates its firm approach to the fight against terrorists in Syria.

“Nevertheless, for the third time this month, diplomatic representatives from the United States, the United Kingdom, France and Ukraine, in turns, changing the tune of their objections… have vetoed the Russian proposition to adopt a standard short project of the Security Council’s press statement condemning the terrorist attacks on the Russian diplomatic mission in the Syrian capital,” the ministry stressed.

On Wednesday, terrorists targeted the Russian Embassy in Damascus with mortar shells, where two shells fell inside the diplomatic compound and two more exploded in the immediate vicinity of the external perimeter of the mission, which caused material damage.