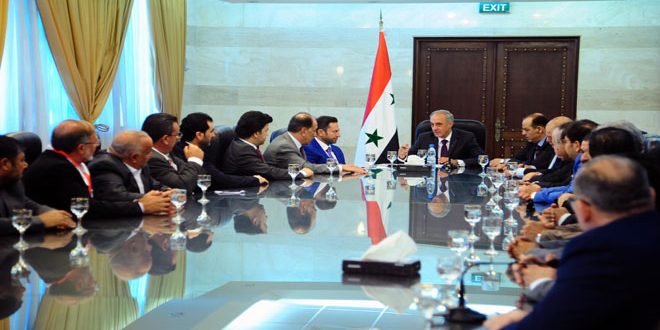 Damascus, SANA – Assistant Foreign and Expatriates Minister Ayman Sosan on Monday met with a delegation of the Syrian expatriates’ committee in Kuwait.

Sousan briefed the delegation about developments in Syria, saying that the changes in the stances of some regional and international powers unmasked the campaigns of misdirection towards what is going on in the country.

He added that the plots against Syria and the Arab region aim at weakening the Arab position and enabling Israel and other forces to
tighten their control on the region.

Sousan affirmed that the Syrian people and armed forces are determined to clear every inch of Syrian territory from the Takfiri terrorists and maintain its territorial integrity and the unity of its people, and maintain Syria’s independent decision-making.

He asserted that the right to decide the future of Syria belongs to its people, rejecting any foreign interference in its internal affairs.

The Assistant Minister also lauded the Syrian expatriates’ support for their home country, saying that they will play an important role in the reconstruction phase.

For their part, members of the delegation affirmed their unlimited support to Syria, expressing readiness to provide everything that
could enhance the resilience of their homeland and contribute to the reconstruction phase.