People of Quneitra: The Golan will remain a Syrian Arab land 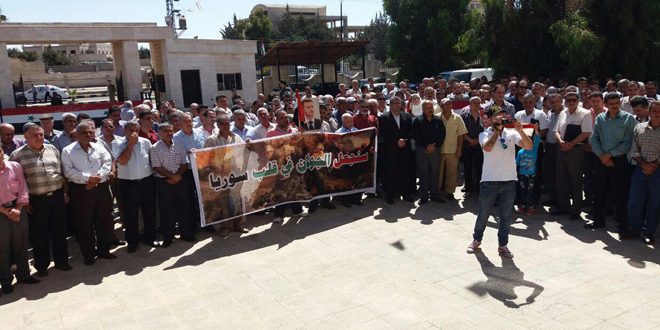 Quneitra, SANA – The locals of Quneitra province staged a protest to condemn the illegal Zionist decision to hold elections for the so-called “local councils” in the occupied Syrian Golan and express solidarity with Syrians in the villages of Majdal Shams, Masaada, Baqaatha, Ayn Qanya, and al-Ghajar.

Last week, the Israeli entity issued new resolutions related to holding elections of the so-called local councils in the villages of the occupied Syrian Golan.

The protest was organized by Quneitra Governorate and al-Baath Arab Socialist Party branch in Quneitra in front of the Governorate’s Building.

The participants affirmed that the Golan has always been and will remain a Syrian Arab land, the occupation will end, the Golan will return to Syrian national sovereignty and that all decisions issued by the occupation authorities are null, void and illegitimate.

In turn, Quneitra Governor Ahmad Sheikh Abdul-Qader stressed on the illegality of the decision of the Zionist entity and that such a decision comes in the context of the attempts at judaizing the Golan, saluting the Syrian people in the occupied Golan who remain steadfast against the occupation.