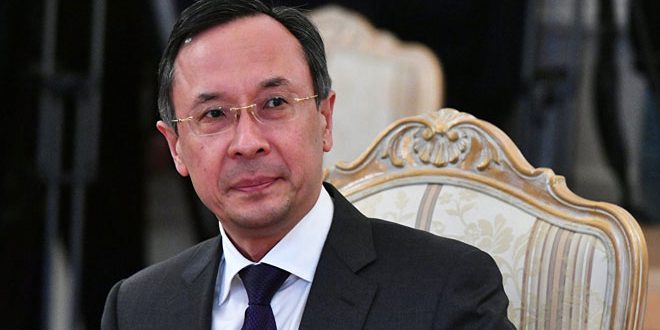 Astana, SANA- Russia, Iran and Turkey, as well as UN Special Envoy Staffan de Mistura and Jordan, have confirmed their participation in the fifth round of Astana meeting on Syria scheduled to be held next July 4-5, Kazakh Foreign Minister Kairat
Abdrakhmanov said Monday.

” We have received participation confirmation from all the guarantor countries at the level of the special representative of the Russian president and deputy foreign ministers of Turkey and Iran,”
Abdrakhmanov said.

According to the Kazakh top diplomat, UN Special Envoy for Syria Staffan de Mistura and the Jordanian delegation have also confirmed their participation.

” We expect the United States to send their high-ranking representative to take part in the next Astana meeting as an observer,” the Kazakh Foreign Minister added.

“We also expect the guarantor countries to finally confirm the participation of the Syrian government delegation, as well as the delegation of the armed opposition,” Abdrakhmanov said.

On June 22, Deputy Foreign Minister Faisal Mikdad said that Syria is ready for the coming rounds of the Astana and Geneva tracks next month, based on preserving its sovereignty and unity and sparing
the blood of its sons.

The Kazakh capital of Astana hosted four meetings on the crisis in Syria where the Russian memorandum on de-escalation zones in Syria was signed in the last meeting.