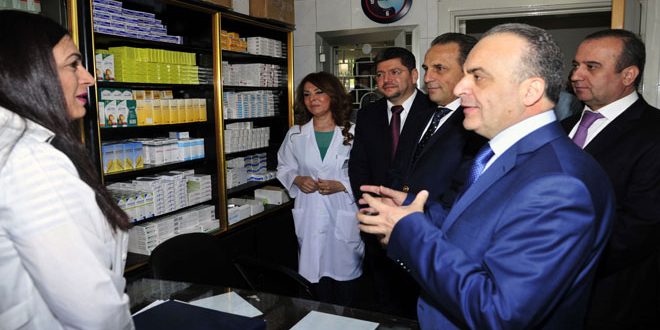 Damascus, SANA – Prime Minister Imad Khamis on Sunday visited a number of health and service facilities to inspect their readiness and to verify that all the requirements for providing services during Eid al-Fitr are available.

Premier Khamis visited Martyr Yousef al-Azmeh Hospital and was briefed on the services provided to the injured army personnel there, conveying to them and their families the Syrian people’s pride in their heroic actions.

Khamis said in statement to journalists that the attacks by the armed terrorist groups carried out on Saturday on Quneitra province with direct support from Israeli enemy is clear evidence of the state of great confusion that the terrorist groups and those who support them are experiencing as a result of the victories achieved by the Syrian Arab Army across the country.

Khamis also visited Abi Zarr al-Ghifari health center in Mazzeh area in Damascus and listened to the citizens’ opinions on the services provided by the center, in addition to visiting the Syrian Trading retail outlet, the Damascus Fire Brigade, and the bread-production facility in Sheikh Saad neighborhood in Mazzeh area.