Lavrov: Deployment of additional weapons by U.S. in south Syria is unjustified 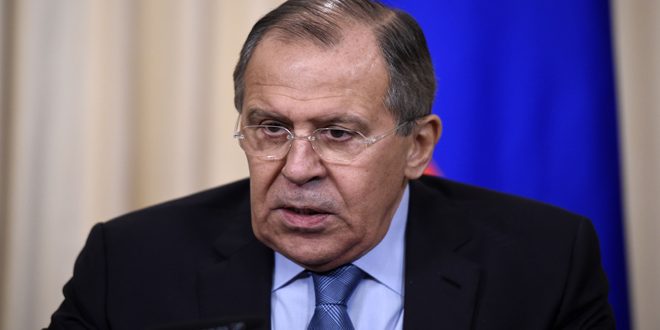 Moscow, SANA-Russian Foreign Minister Sergey Lavrov affirmed on Friday that the deployment of additional weapons by the United States, including rocket launchers south of Syria near the Iraqi and Jordanian borders, is unjustified.

“As for reports that the Americans are deploying more weapons, including MLRS, to southern Syria on the border with Jordan and Iraq…Russian military are analyzing the situation in the country, including through the channel that we have with the US on preventing unintended incidents,” Lavrov said in a press conference with his Lao counterpart.

“According to our data, there are almost no ISIS units left in this area. Some experts view the deployment there of such serious weapons as an intention to create an additional military grouping to ensure steady communication channels between the government and pro-government forces in Syria and their partners in the neighboring Iraq,” Lavrov stressed.

He warned of the attempt to replace the establishment of a common front against terrorism by trying to “again carry out geopolitical maneuvers” speculating on a sectarian factor, adding that “the Muslim world should be united with all the other sides in the fight against terrorism threat.”

Lavrov pointed out that Jabhat al-Nusra terrorist organization is still a big mystery for Russia, adding that, although it is listed by the U.N. Security Council, the U.S., Russia, and European countries on terrorism list as a branch of al-Qaeda, it is still far from the anti-terrorism operation, where the US-led coalition is excluding the organization’s sites which is very worrying matter and Russia is discussing that with US partners but till now Russia doesn’t get clear answers.

On the information published by the Russian Defense Ministry on the possibility of the death of the leader of ISIS Abu Bakr al-Baghdadi, in a raid by Russian aerospace forces, Lavrov said that there is no one-hundred-percent confirmation yet that Abu Bakr al-Baghdadi has been killed.

“All examples of such actions to ‘decapitate’ terror groups had always been presented with great enthusiasm and pomp, but experience shows that later these groups restored their combat capabilities. These groups, both ISIS and al-Qaeda and their numerous reincarnations are still active,” Lavrov added.