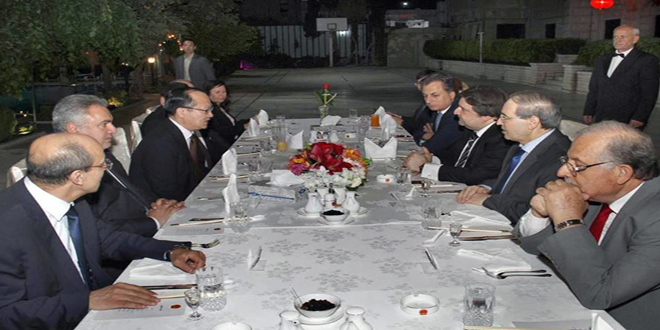 Damascus, SANA – Culture Minister Mohammad al-Ahmad affirmed that the relation between Syria and China is an example of mutual cooperation and cultural and civilizational interaction.

In a ceremony held at the Chinese Embassy in Damascus, al-Ahmad said that Syria’s participation in the summit of the Belt and Road Forum for International Cooperation which was held recently in China embodies the historical fact that these countries located on the ancient Silk Road reflect most of the ancient civilizations, including the Chinese, Indian, Arab, Persian, Assyrian, Aramaic, Phoenician and Pharaonic and came to meet again in the 21st century to study and discuss ways of cooperation among them.

He pointed out that Palmyra and Aleppo, 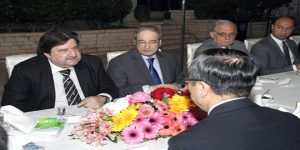 the most important Syrian cities on the Silk Road, were subjected to deliberate sabotage by armed terrorist organizations, adding that the Syrian government is exerting all possible efforts to rehabilitate the affected monuments in the two cities.

He noted that he discussed with the Chinese Minister of Culture during his participation in the Belt and Road Forum means of joint cooperation and the support that China can provide in this field.

For his part, Chinese Ambassador to Syria Qi Qianjin said that the Chinese-Syrian cooperation in the framework of the Belt and Road initiative is in line with the strategy of heading towards the east proposed by President Bashar al-Assad, pointing out that the reconstruction process in Syria will be an important station for the Belt and Road cooperation.

He also hailed the communication and cooperation between Syria and China in the areas of reconstruction, economy, trade and culture, adding that his country signed with the Syrian side an economic and technical cooperation agreement on providing humanitarian assistance to Syria as one of the outcomes of the implementation of the Belt and Road initiative.

The Belt and Road Forum for International Cooperation was held by China on May 14–15 in Beijing, with the participation of 29 foreign heads of state and government and representatives from more than 130 countries and 70 international organizations.